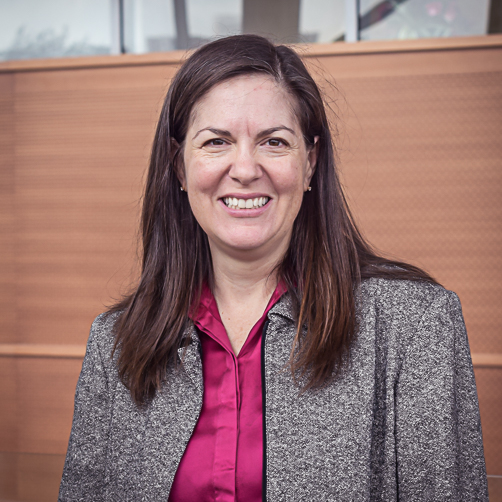 Dr. Pflum received a B.A. degree from Carleton College working with Jerry Mohrig in physical organic chemistry. In Ph.D. training at Yale Univeristy with Alanna Schepartz, she worked on several bioorganic projects focusing on phosphoproteins and transcription factors. In an NIH post-doctoral position at Harvard University with Stuart Schreiber, she worked on chemical biology and cell biology projects focusing on histone deacetylase proteins. Dr. Pflum joined the faculty at Wayne State University in 2001 with a research program at the interface of Chemistry and Biology focusing on two cancer-related proteins - kinase and histone deacetylase enzymes.

Research in the Pflum group integrates organic synthesis, biochemistry, and cell biology to understand the molecular basis of disease. For many years, we have been particularly interested in two proteins associated with cancer formation- kinase and histone deacetylase enzymes. Our goal is to use a chemical approach to characterize the role of these proteins in cancers, which will lead to identification of novel drugs targeting these proteins and biomarkers to diagnose illness.

I. Kinase Enzymes
Kinases catalyze protein phosphorylation, which is a ubiquitous post-translational modification that can profoundly influence protein function. However, identifying the position of phosphorylated amino acids and the physiological significance of phosphorylation has been challenging due to the paucity of available tools. We are interested in developing chemical methods to characterize kinase-catalyzed post-translational modifications.

We recently reported use of ATP analogs to label, visualize, and enrich phosphorylated proteins from protein or peptide mixtures. The method relies upon ATP analogs with a gamma-phosphate tag that can be used as a cosubstrate by kinases to label recombinant proteins and cell lysates (Figure 1). Using this strategy, we have established kinase-catalyzed biotinylation, dansylation, and crosslinking (see Senevirathne, et al. 2016). We are currently focused on developing new methods to probe kinase-substrate pairs based on kinase-catalyzed labeling (see Embogama and Pflum, 2017 and Dedigama-Arachchige and Pflum, 2017), and applying these novel labeling methods to characterize phosphoproteins in cell lysates and live cells (see Fouda and Pflum, 2015). These studies will pioneer advances in cell signaling research by coupling cell biology and biochemistry with novel synthetic ATP analogs.

II. Histone Deacetylase Enzymes
Histone deacetylase (HDAC) proteins catalyze deacetylation of acetyllysine residues on protein substrates and are key players in cancer progression and have emerged recently as targets for anti-cancer drugs. While HDAC activity has been intensely studied, two pressing needs still remain in the HDAC research field. First, HDAC substrate selectivities are poorly understood. The oldest and most well studied protein substrates are histone proteins. However, recently many, many acetylated proteins have been identified in cells, which strongly suggests that HDAC enzymes deacetylate substrates beyond histones. To facilitate identification of HDAC substrates and reveal novel biology associated with HDAC proteins, we have developed "substrate trapping mutants" (see Figures 2A and 2B). Using substrate trapping mutants, we have identified two new HDAC1 substrates- Eg5/KIF11 and LSD1 (see Nalawansha et al, 2017 and Nalawansha and Pflum, 2017). These new substrates have revealed novels roles of HDAC1 is cell division and gene expression, which are unregulated in cancer.

The second significant challenge in the HDAC field is the lack of selective inhibitor compounds targeting only one or two HDAC proteins among the eleven HDAC family members. The second goal is this project is to identify inhibitors that selectively target only one or only a few HDAC enzymes. Towards this second goal, we have synthesized a variety of small molecule HDAC inhibitors and evaluated their potencies (see Bieliauskas et al, 2016). Our recent results have identified dual HDAC6/8-selective inhibitors based on the FDA-approved drug Vorinostat (see Figure 2C, Negmeldin et al. 2017, and Negmeldin and Pflum, 2017). Taken together, through inhibitor development and substrate identification, the HDAC projects in the Pflum lab will deepen our understanding of cancer onset and progression, while also assisting in the development of next generation cancer therapeutics.