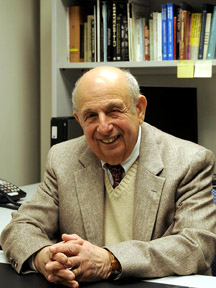 After retiring from Wayne State University as Distinguished Professor, in 2003 (and having been awarded numerous distinctions as teacher and scholar), Stern has stayed professionally active and involved in his college and department.

His current activities include membership on the Dean’s Advisory Committee (CLAS) and has served on dissertation committees and has undertaken committee assignments for the Academy of Scholars, which he founded as Provost under the presidency of Thomas N. Bonner. He has also guest lectured in WSU classes at the invitation of his colleagues. Beyond that he has volunteered as a lecturer during virtually every semester after his retirement under the aegis of the WSU program for adults (SOAR).

As a scholar he has participated in round-robin lectures for the University of Hamburg, Germany, and guest lectured at numerous conferences in Germany and Austria (e.g. at the Universities of Berlin and Vienna). In addition he has read papers at conventions such as, the Modern Language Association, the Brecht Society, Society of Exile Studies, and the PEN Club. The majority of his papers dealing with a variety of subjects have been published in scholarly journals. His work in progress is his autobiography.

He has received several awards beyond those bestowed upon him prior to his retirement. In March of 2017 he will receive the Ovid Prize of the PEN Center of German-Speaking Writers Abroad, one of the branches of the International PEN Club. The award is for “lifetime achievement.” Prior to this the same organization gave him the annual prize for the writing of prose fiction.

Since WSU’s standard of achievement also includes civic activities, it should be mentioned that he received an outstanding civics award from the College of Liberal Arts. The French Republic has honored him by bestowing the Knight of the Legion of Honor Medal.