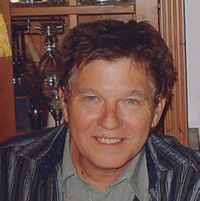 Dr. Mark Ferguson joined WSU in 1991 and was Senior Lecturer in German in the Department of Classical and Modern Languages, Literatures and Cultures. He holds an M.A. and Ph.D. from the University of Wisconsin – Madison, and had been JYM's Program Director 1995-2020.

Dr. Ferguson is originally from Wisconsin. His passion for education abroad began when he participated in the American Field Service (AFS) program to Thailand while in high school. Throughout his college career – both undergraduate and graduate – he gained extensive international experience by living, studying, working and teaching in Europe (Paris, Berlin, Mainz, Bonn, Duisburg, Essen). As an undergraduate at the University of Wisconsin-Madison he studied in Germany with Wayne State's Junior Year in Freiburg program 1976-77.

Before coming to Detroit in 1991, he taught German literature at the Universität Essen in Germany and at Bates College, Maine.

Dr. Ferguson is a member the American Association of Teachers of German (AATG), the German-American Chamber of Commerce of the Midwest – MI Chapter, The Forum on Education Abroad, BMW Herbert Quandt Foundation Transatlantic Forum, New Traditions Network (Berlin), and author of Study Abroad Europe: A Workbook (2013).

In 2018 he was honored by an alumnus of the Junior Year in Munich program who created an endowed JYM support fund: The Dr. Hans-Peter Söder and Dr. Mark Ferguson Next Generation JYM Endowed Fund.